A video of a puppy riding on a rooster, with a little girl intoning “You’re my best friend”—that’s the antidote to sadness according to the mood-recognising algorithm featured in the recent Netflix film Don’t Look Up. However you feel about the merits of the Leonardio DiCaprio-Jennifer Lawrence vehicle, there’s no denying that it holds a mirror to contemporary society. While our smartphones are not yet capable of intuiting human moods, it can, with the input of bodily information such as sleep habits, heart rate, daily footsteps, together with self-evaluations, detect patterns that guide practices to achieve well-being.

Singapore wellness platform Mindfi reports that 68 per cent of the 100,000 employees surveyed from its 30 corporate clients across Asia experienced an improvement in mental well-being within one month’s use of the app. Moreover, research done with a Singapore hospital shows that regular usage can reduce symptoms of depression such as feelings of helplessness or hopelessness, irritability, and loss of energy.

Mindfi founder Bjorn Lee, 40, had his own experience to reference when he launched the app, when, 12 years ago, a doctor pinned his acute chest pains on psychological stress. He began to practise meditation and today meditates up to 30 minutes daily.

With Mindfi, users’ wearable data from the likes of Apple, Google, or activity tracker Oura is connected with the app’s assessment programme that collects their wellbeing data such as stress, attention span and moods. Its proprietary algorithm then recommends activities in real-time, such as going for a five-minute mindful walk, journaling for 10 minutes before sleep (cognitive behavioural therapy), or scheduling a 1-hour therapy session with a performance coach or therapist.

Says Lee: “The artificial intelligence (AI) improves based on user feedback, guidance from experts, and lots of algorithmic tinkering based on large datasets.”

“Mobile wellbeing apps do not provide magic cures,” says Dr Kevin Kok, a medical consultant and former chief operating officer of a telemedicine firm. “They are good in motivating behavioural changes to improve well-being, but users still have to put in the effort. If they don’t act on the advice, they won’t get better.”

Then, there’s the privacy issue. Personal information can be leaked, hacked, or sold, to the users’ detriment. Companies like Mindfi comply with bank-grade data encryption and healthcare data protection policies, with its data servers ensuring that personal data is “firewalled” from health information.

There’s a gentler way of improving one’s psychological wellbeing that precludes the input of hard data into an app, but is backed by data and evidence-driven methodologies nevertheless.

Happiness Scientists founder Yeo Sha-En is out to help people feel happy. The positive psychologist expert and professional speaker highlights three broad, research-proven strategies. They include gratitude giving. Research by Dr Robert Emmons and Dr Michael McCullough in the United States found that participants who wrote about three good things weekly were more optimistic and felt better about their lives. In another exercise, writing a “gratitude letter”, then delivering it, or even reading it aloud, resulted in huge increases in happiness scores, with the benefits lasting beyond one month.

Show Kindness To Everyone And Everywhere

Engaging in random acts of kindness, too, such as complimenting someone, buying someone a coffee, or reaching out to talk to a new colleague, can also increase your happiness. According to some studies, these gestures can make individuals feel happier and less depressed or anxious. The acts tap into humans’ natural pro-social behaviours of wanting to help others, activating the brain’s reward system to make the person feel good.

Strengthening social connections by spending time with family and loved ones is also a way to increase happiness. In the longest study of happiness in humans, conducted by the Harvard Study of Adult Development, strong relationships were the biggest factor in people feeling happier, physically and mentally healthier, and living a longer life.

To measure the effectiveness of the strategies, Yeo suggests that individuals monitor their happiness level pre and post-intervention, through interviews, or by asking friends and family to assess.

The Strategy To Happiness

“Science tells us there are effective strategies to increase our happiness,” says Yeo, to the question of whether one can learn to be happy. “What makes the difference is not just learning it or knowing it, but practising and applying these strategies to truly experience their positive impact on our life. “Sometimes, it is easier said than done,” she acknowledges. People with chronic depression will require a multi-pronged approach that includes medication, therapy, or other methods depending on the severity of the condition.

Some people experience trauma and may have difficulty overcoming it to find happiness. Others may chase what they think makes them happy, such as promotions or material success, but find that these things don’t ultimately satisfy. Yet others may be grappling with negative self-talk, which can limit their ability to achieve what they want in life.

Yeo’s strategy to find happiness applies even when the world is on the brink of an apocalypse, it seems. In Don’t Look Up, DiCaprio’s everyman character finds solace not in a spaceship, but in sitting down for a simple dinner with good friends and family, and with humility, give thanks for the life they’ve been given. It makes sense, even if you revile the film. 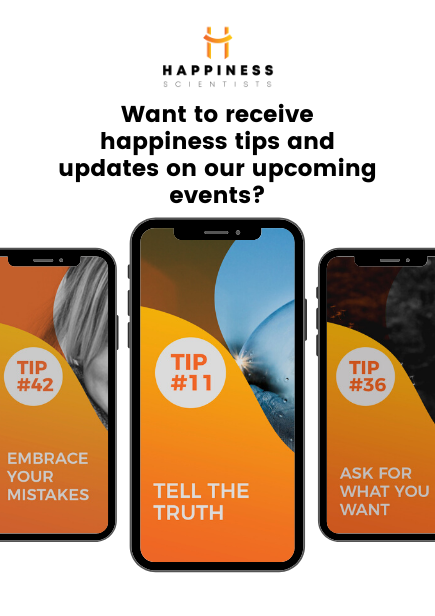 Get Weekly Happiness Tips Straight to your inbox!